Noam was born and raised in Israel and has somehow consistently found herself on a stage. She has always been involved with theatre in high school but stopped performing shorty after graduating. Noam started improv classes with sick puppies comedy in 2013 because it was cheaper than therapy. Improv has reawakened Noam’s performance bug ever since she’s also gotten involved in standup. You can follow her on both Twitter and Instagram @NoamAlaska 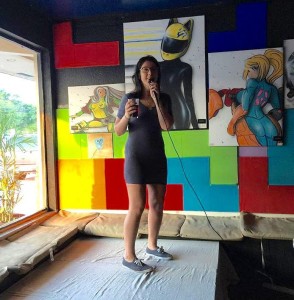 I was doing Improv regularly. I was going to star in Guffpunch and in order for me to be in the movie I needed to do stand-up so I ended up doing it as a New Years resolution.

2) If you could have any superpower what would it be and why?

Teleport and take people with me so I can travel for free.

3) What type of comedians do you enjoy watching (locally and nationally)?

Locally: Obviously Joe Dewayne; I saw him perform at the Buddah and I thought he was funny. His attitude was self-deprecating and it worked. I like Awni Issa; when watching him it almost feels that what is naturally part of him. He just has it in his blood. Leah Jay; I’ve known her since we were twelve; her jokes are all part of her personality. I love how filthy she is. Nationally; I love Robin Williams because his brain works a different way than a normal human. It’s ten times faster. He can go off on a tangent then come back full circle to talk about the thing that he was previously talking about without skipping a beat.

4) What types of foods do you enjoy eating when you have time to cook?

I make a killer hummus. I also love Greek food such as lamb burgers.

I love that it’s very liberating. You just go on there; say things that you think are funny to you; you find out that things are funny to other people also. A lot of comedians are kind of weird, because it’s our chance to have a voice and form a community.

6) Who is the person that you would want to hang out with  (Alive or dead) and where would you take him?

Robin Williams; to Tenth Level Tavern so that we could drink beer and he could do comedy for us.

7) What don’t you love about stand-up comedy?

I hate that if you bomb you want to kill yourself. If you bomb it’s so painful. There is nothing fun about bombing. It’s not only that you didn’t do well in something that you love but you did it in front of people.

8) Does Improv have any benefit with stand-up comedy?

Absolutely especially with riffing or crowd work. It helps you to connect with people and think on your feet.

Bombing, bad rooms; it’s all a part of the journey.  There’s ups and down to comedy just like anything. You have to keep on doing it.

10) Why should people check out the open mic at Tenth Level Tavern?

Because it’s really fun, it’s very open, a little bit of a difficult room with noise level, audience response. It’s always a fun room there’s always people there to help each other.