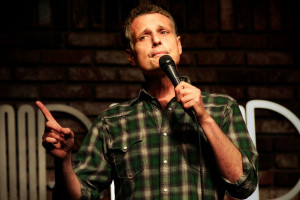 Murray Valeriano is an American comedian, producer, writer and radio host. Valeriano has written for The Tonight Show Starring Jimmy Fallon, The Tonight Show with Jay Leno, Bill Engvall‘s Here’s Your Sign Awards and Ridiculousness. He co-hosted the “Off the Cuff with Bill Engvall” radio show on Sirius/XM and currently hosts and produces the “Roadstories” podcast.

1. What motivated you to want to become a comedian?

It’s what I always wanted to be. Since I was a kid. I grew up in the 80’s during the comedy boom. It just took me forever to get the balls to do it. I started in my late 20’s.

Thank you that you think it’s clever. It has to happen to me. It has to be something that happens organically to me so it’s real and is gonna be clever because it’s based on reality.

3. What types of food do you enjoy cooking (Whenever you have the time to)?

I married a Greek woman so she handles all of the cooking. So I make a pretty mean guacamole and hummus.

4. Who are some comedians that you enjoy watching?

Brian Regan is god; he’s been around forever. Everyone loves him from children to top notch comedians to alternative comedians. He’s not pigeon holed into anything but funny. He has a goofy/silly sense of humor that I love and wish that I could do more of. Bill Burr; he’s great. I don’t think he’s really afraid to talk about anything. I had seen him do stuff in uptight left wing Hollywood that I just watched everyone’s butt holes clench. Then he would swing it around, tag it and then watch everyone laugh. Jerry Seinfeld is the guy that I watched the most growing up. He was the king of comedy in the late 80’s/early 90’s and was the first one that I had ever seen do a call back it was amazing. I love Johnny Carson; he’s the king of late night and there will never be another one like him. His opening monologue was either hilarious or it tanked and then when it bombed he would make it even funnier and he was a huge proponent of stand up. Back in the day if you did a tonight show you had a career the next day.

5. What do you love most about doing stand up comedy?

Killing is the best part. I like travelling around, doing stand up in different places and making different walks of life laugh.

6. How did you end up getting picked up to write for TV?

My buddies and I got a pilot deal of a show that we were doing at a comedy club. We shot it and it went nowhere. That got me hired to write someone else’s pile and then it snowballed from there. Then I decided that I wasn’t going to go back to a day job and then it was a year and a half before I got another writing gig. Those were lean times and I just stuck with it.

7. What advice would you give to other comedians?

Be careful when you get to feature, because it’s a very cush gig and easy to get stuck into this position. You don’t have to deal with an ice cold crowd, you have no pressure to sell tickets as that’s the headliner’s job and it’s easy to be complacent and get stuck in the middle spot.

8. Why should people check you out at the Spill The Beans Comedy Show this weekend?

Because we are gonna have a good time.