Manny Garavito is a self-made comedian in Miami. Most bookers look the other way before ever deciding to book him, but always look his way to get the best ideas. Has lived off comedy for over three years in a city where comedy isn’t as popular in comparison. Manny started Brickwall Sessions Comedy to practice balancing creativity and business and three years later manifested Miami Comedy; a central hub where comedy is accessible to both the audience and comedians with the process of affiliate marketing. One of the most influential comedians in the city. But no one will tell you that, so you heard it here first. 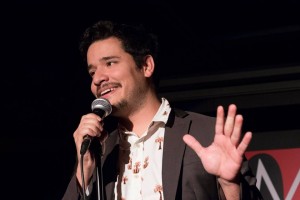 I always enjoyed watching stand-up comedy when I was young. I first started thinking of doing it when I was watching Bill Hicks. I liked him a lot and I started getting into NY comedy through cringehumor they were the people that ran “The Stand Comedy Club” and produced comedy shows all over New York.

2) If you could have any superpower what would it be and why?

To disrobe people by looking at them, because nobody would want to fight you when they are butt naked.

3) What type of comedians do you enjoy watching (locally and nationally)?

Local: John Vargas, he’s standup comedy. He goes up and has it all figured out. He’s consistent. Phatchopz, he just doesn’t care and is great at roasting. Fasil, because he’s super awkward and I enjoy seeing how he handles it on stage. Bill Burr, Eddie Murphy, Sebastian Maniscalco, Kirk Fox, Rich Hall and Todd Rexx.

4) What types of food do you enjoy eating when you have time to cook?

Eating a lot of greens. Mostly spinach, kale and I had really been getting into eating Indian food.

As a comedian you are able to transfer ideas and put ideas out there by using the freedom of speech and you get immediate feedback with a laugh for all of your hard work. It’s an incredible art form that is super under rated.

6) Who is the person that you would want to hang out with and where would you take them?

Groucho Marx; he’s a genuinely funny guy. He looks like he knows how to carry a good conversation. He looks like he could attract women that are a lot younger than him. I would go out drinking with him at a fancy wine bar.

7) What don’t you love about stand-up comedy?

8) What is your advice to new comics?

9) How would you compare doing stand-up comedy in NYC to Miami?

10) Why should people check out Miamicomedy.com?

This website will help the scene, because it’s a directory on where people can find shows on their time. Its also a place for comedians to network and find the producers of comedy shows if they decide to put up the info on there.