Jacky B is a Fort Lauderdale-based stand-up comedian who recently moved to NYC. Jacky discusses her life experiences including her crazy family, experience in sex and dating, and overall questionable morals. With her sweet looks and sarcastic style, she easily captivates audiences of all walks of life and shows that she can hold her own in a male dominated industry. She has opened for Myq Kaplan, Forrest Shaw, Matt Fulchiron, performed at the Fort Lauderdale Improv, West Palm Beach Improv, The Filmore Miami Beach at Jackie Gleason Theater, Creek and the Cave, Comedy Central’s South Beach Comedy Festival and the 2015 Floridas Funniest Competition. Jacky is also known for running two very popular shows in South Florida at Gigi’s Music Cafe in Sunrise and American Rock Bar in Deerfield Beach. You’ll be sure to be laughing while Jacky’s…Just Kidding! 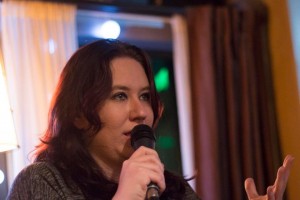 I always wanted to do standup. I had my own radio show and I like having my voice be heard.

Local: Mike Atcherson; his creativity, he’s a good joke writer and the I like the type of jokes that he comes up with. Trey Maddox; he’s really funny and Jesse Thompson; I like the character that he has and he is very creative. National comics that I enjoy watching are Tig Notaro, because of her ability to turn pain into hilarity and Tom Segura as I find him to be relatable.

4) Why did you decide to move to NYC?

I always wanted to move here & for comedy.

5) Who would you want to play you in a movie?

Jillian Jacobs from Love, because she messed up a lot & she’s ok with it. Kind of like me.

6) How do you feel about women in comedy?

It’s great. Not enough of us. They put boundaries between sexes. There is a lot of camaraderie & support in the NYC scene. I also believe instead of having just women shows that all sexes should be able to perform together.

Get on stage, write as much as possible, listen to your peers, don’t be cocky and either go all out or don’t commit at all.

The politics and cliquishness. Everyone is equal and deserves a fair shot. The ego; unless you are a comedian that’s fully making a living you shouldn’t judge other comics. No one is better or worse.

9) What is it about you that makes you awesome?

I messed up everything that I touched in life and I still survived and another thing that makes me really awesome is that outside of comedy I like cats and dogs.

10) Why should people check you out at a show at Gigi’s?