Fasil is awkward, after growing up in a foreign country (New Jersey). He moved to Miami, North Cuba to pursue his dream of being a comedian. This comedian’s self-deprecating style will keep you laughing out loud while you smile and say to your friend, “He is funny!”He is likable, his topics are relatable as he is poking fun at relationships, being awkward or talking about daily activities. Fasil has a clean style of comedy that is witty, to the point and will have you wondering what will he say next. 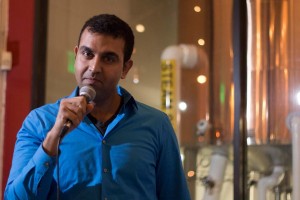 1. What motivated you to do stand-up comedy?

I had always been a huge fan of comedy and I enjoyed watching comedy movies since I was a kid. Jim Carrey was my favorite actor to watch and I thought it was the greatest thing in the world to get paid to make others laugh. In college I took Accounting to head towards the safe route, but after college I worked it and I didn’t enjoy it at all. When I moved down to Miami I wanted to make more friends so I tried out Improv plus my friend Teresa encouraged me to try a Toastmasters Humorous speech contest as she thought that I was funny so I did and I advanced into the semi-finals. As I was working a second job as a server I noticed the funnier I was the higher my tips got so I thought why not make comedy my 2nd job plus women love funny guys.

2. What type of comedians do you enjoy watching?

My favorite local comic to watch is Darius Culpepper; I enjoy watching clean comedy, It is also encouraging to witness his work ethic and see the obstacles that he overcame to be paid regular at the Improv and a Florida’s Funniest Comedian Finalist. I also enjoy watching Michael Sowa (His humor makes you think and he has no idea how great he is going to be), Dan Long (I am a huge of his sarcasm/cerebral style of comedy) and John Gregory (He’s the best joke writer in South Florida hands down). My favorite national comics to watch are Orny Adams (His sarcasm is great), Jerry Seinfeld (He’s really intelligent and every time that I watch him perform I feel as if I am learning something new), Mitch Hedberg and Steven Wright (I am a huge fan of one liner comics).

3. If you could hang out with anyone alive or dead; who would it be?

My grandfather. Everyone in my family says nothing but great things about him and they say that he is a lot like me plus I had never seen him before so it would be nice to meet him. I would take him to my mom’s house for dinner as she is an amazing cook and I am sure that she would be pleasantly surprised to see him.

4. Who would you want to play you in a movie?

Vince Vaughn; his wit, sarcasm and tallness would fit in perfectly with a movie about me.

Having to wait a lot at mics, comics that bad mouth others, negativity and the drama that goes on when you deal with these comics that want to save the world and give unsolicited advice to other comics which is often unnecessary/incorrect.

6. What types of food do you enjoy cooking when you have time to eat?

I played basketball and was involved in track in high school so I am a huge pasta guy. I also like to eat healthy.

7. What was the toughest thing that you faced and how were you able to overcome it?

When I first moved down to Miami I incurred a lot of debt and I even ended up maxing out on my credit card. I overcame it by getting a 2nd job, limiting my expenses, wrote down my goal on a piece of paper and obsessed over paying off all of my credit card debt in a year. I was able to eliminate it in 11 months.

8. What is your advice to New Comics?

There are comics that genuinely want to help you out and there are comics that are negative and want to bring you down. Avoid the negative people like the flu. If they are making fun of another comic in front of you chances are they are also making fun of you behind your back. Hang out with positive people that will uplift you, give you constructive feedback when you ask for it and those that genuinely want you to succeed. Also never give up. If there is something that you want bad enough you just have to work harder at it to get. There is so much talent in South Florida that in order for you to be noticed you have to be original.

9. What is it about you that makes you so awesome?

I don’t back down even when I played basketball I guarded guys that were bigger than me and was able to hold my own with them; you can put the toughest/obstacle or situation in front of me.  I will stay focused and find a way to overcome it.

10. Why should people check me out at the next big show that I will be performing at in the Flamingo Bar Theater on March 30th?

Manny Garavito; the person that runs Miami Comedy has a lot of experience producing high quality comedy shows. He also does a great job attracting professional comics that perform in New York City (One of the best cities to do stand-up comedy at) and drawing an audience that appreciates the art of comedy. It’s the chance for you to see me do stand-up in one of the best stages in Miami as the Flamingo Theater Bar is ideally situated in the heart of Brickell and it is a must see event on a Wednesday night!