Eric Rosenblum is an entrepreneur, stand-up comedian, and self-proclaimed “Nice guy”.  Originally hailing from Staten Island his relationship status is currently single after jumping headfirst into the perils of internet dating. He views internet dating as a distant memory as he searches for his first Russian bride. Eric’s love for Saturday Night Live and comics including Jerry Seinfeld, Ray Romano and Adam Sandler inspired him to delve into the world of stand-up comedy. He draws much of his material from his life-long roommates: Mom and Dad. Eric’s a sucker for soft, plush towels. Catch Eric’s “Nice Guy” act at comedy clubs before he becomes and arrogant prick. 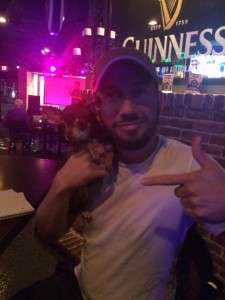 I always love the art. When it comes to stand-up; it’s something where there is never something ending to it. It’s always a journey. I love it.

2) If you could be any local South Florida Comic for a day; who would you choose? And why?

David Stebbins; every time I see him he seems fearless and you never know what to expect from him. He formulates it so well. I would like to get into his mind and see how he works it.

3) Where was the most interesting place that you ever did stand-up comedy at? And why?

At a yoga event with Josh Rosen. Josh did a perfect set. I am usually clean, but when I went up there I said something that turned the crowd off so much that the guy grabbed the mic from me in the middle of my set and said that “It was enough”. It was awkward, because people all around from me were stretching and there were dogs all over. They asked me to go back up, but I said that “I am good”.

4) Who is your favorite super hero? And Why?

Spiderman, I like that he seems like the average kid. He’s not very big, but once he’s in that costume he can handle himself to any bully, but he doesn’t try to get into any fight. He’s kind of not a ladies man and he’s humble. He has a low key personally that isn’t constantly seeking attention.

5) What type of comedy are you into?

Jim Gaffigan; he’s goofy/funny, clean (I like to go clean) and I also enjoy watching Anthony Jeselnik, because he goes darker and to the extreme. His punch lines are never safe.

I have the punch line in my head first and then I write backwards. I do the whole setup punchline. I don’t really tell stories, but I still make it relatable to others. I make fun of why someone is misspelling my name and then I go backwards.

7) What is one of your awkward quirks?

I have a habit of being robotic. Move my hands around unnecessarily.

Because I am on time, I am clean, I am professional and I would meet any requirements that a booker would set up. I wouldn’t take the job if I felt comfortable that I would be able to do it.

Patience; whether you are doing this for a month, 6 months or years. You need to have patience. You aren’t going to make friends or get booked right away. Continue writing, being yourself and being really good off stage. Be a nice person. Don’t try to be phony and be anyone else but yourself (Unless you are jerk).

10) Why should comedians buy from Southgate Design?

I enjoy managing comedians. When you are a comedian you are going to focus so hard on being funny.  Give us a call or send us an email and let us take care of your promotional worries. We’ve been doing it for several years, I know the industry very well and you could focus on just writing and be funny. We’ll help you make money.