Brian Coronado aka the “Man in Black” is a South Florida native who’s been writing and performing since he was seven years old. The former collegiate athlete and DJ is one of the founding members of “Degenerate Comedy” and best known for his energetic and subversive style. He is the resident host of the Kreepy Tiki, Kelly Brothers and Inkwell Pub. Guest hosting Coconuts, Catskills, Marina 84, Stache Fort Lauderdale and the Funky Buddha. Comedy has taken him from the depths of South Florida to Immokalee, Daytona, St Pete, Tampa, Orlando, Pensacola, Jacksonville, Covington, Mandeville, Lafayette, New Orleans, Atlanta Amsterdam with far more to come. 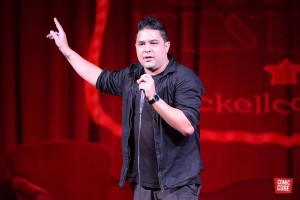 I’ve always loved and respected comedians but the day I started really pursuing itwas after watching the A&E special “The Tragic Side of Comedy” Pretty morbid but I have an opinion, I have a different outlook, so I kept thinking,why can’t I do this?

It’s a tie…. Bill Hicks – Just so I could update him on America, politics, comedy, technology, etc. Andrew Jackson – Because I know he’d challenge Donald Trump to a duel and kill him

Obviously our Degenerate crew – Matt Bellak – John Hyne Bill Burr / Moshe Kasher / Natasha Leggero nationally I really like anyone that has an unique opinion or point of view and isn’t afraid to show it. Have something to say, stick by it, and stop going for the cheap laughs

I wore black ever since I was in the 5th grade. It’s the only color that made sense to me. That was before I went goth.

5) What is the most important thing that you still have that should be thrown away?

Hockey jerseys from high school and college. I keep them for the memories.

6) How do you handle hecklers?

I just show no fear and show them this is my show/my time and be more quicker than they are since audience members tend to be more drunk anyways.

You aren’t going to be good at this for a while and you aren’t going to get paid doing this right away. So if that’s your motivation then you should quit right now and start a podcast. If not, write as much as you can, get up at least half the month, and keep pushing until you find your voice.

8) What don’t you love about stand-up comedy?

The paparazzi. I hate those guys….

9) What is it about you that makes you awesome?

10) Why should people check out your open mic at the Dive Bar in Ftl the first Tuesday of every month?

Cheap drinks, good room and it can get pretty colorful. The first show of every month is a themed booked show and this month’s is called the “Get off my lawn” show with older comics.