Amy grew up in the suburbs of Chicago with parents who love theatre. Growing up she was privileged enough to get to see many musicals, plays, stand-up and improv performances as well as dance performances. During her high school years, she was dedicated to studying dance. Amy received her BFA in dance with a minor in theatre from the University of Iowa. After graduation, Amy spent 10 years performing in Carnival Cruise Lines’ various production shows while traveling the world. Once she retired as a dancer and moved to dry land she thought to herself, “Now what?” And the answer was, “Give stand-up comedy a try”…of course. So now here she is, in her first year of giving stand-up comedy a try. 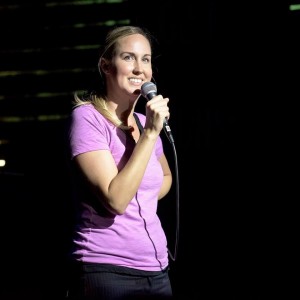 1. What motivated you to do stand-up comedy?

It was always my dream to be a professional dancer since I was a child. I studied dance growing up and majored in dance in college. Then I had a 10 year career with Carnival. I had fun travelling but I wanted to have a normal life since it was a nomadic lifestyle which made it tough to keep relationships and I wanted to start a new chapter.

3. If you could hang out with anyone alive or dead; who would it be? And where would you take them?

David Sedaris; his quirky, weird, funny and his books make me laugh at loud I have tickets to see him at “An Evening with David Sedaris” and I would like to visit him at his house in England.

4. Who would you want to play you in a movie?

Jennifer Lawrence or Jennifer Anniston; someone name Jennifer. They are great actresses, beautiful and popular. Everything that I want to be.

Having to drive late at night for gigs. I am new to it so I still sit nervously until it’s my turn.

6. How do you feel being a female doing stand-up comedy in a male dominated field?

I think being a female stand up is beneficial because it makes you stand out a bit from the sea of men.

7. What do you love about doing stand-up comedy?

I love the writing part. It’s the most fun/challenging thing.

8. What is your advice to New Comics?

Just get up there and try it the first time and having the guts to do it is a big accomplishment.

9. What type of comedians do you enjoy watching?

10. Why should people check you out at the Coral Gables Comedy Festival this Thursday?

It will be a fun show as there will a lot of local stand-up comedians that are funnier than me and a portion of the proceeds go to a good cause in University of Miami’s communication program.